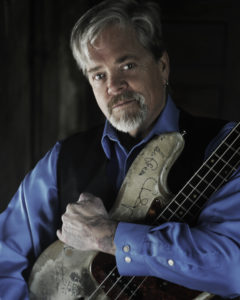 John Cowan, also known as the Voice of Newgrass, has been singing his heart out for thirty-seven years now, and his soaring vocals have only improved with time. A true innovator, John applies his powerful pipes to genres from country, bluegrass, and gospel to soul, jazz, and rock-and-roll – often within the space of a single concert. His ability to move fluidly through multiple styles, and carry mesmerized audiences on the journey with him, has set him apart as one of the most loved and admired vocal artists of his generation, not just by fans and critics but among fellow musicians as well.

John Cowan was born on August 24, 1953, in Minerva, Ohio, and got his musical start in Louisville, Kentucky, where he played in various rock outfits like Everyday People and Louisville Sound Department in the early 1970s. But his rise to fame began in earnest in 1974 when he auditioned to play bass for the then up-and-coming New Grass Revival. The audition went well, and John was offered the gig. It wasn’t until he’d accepted the job that the shy 22-year-old casually mentioned, “By the way, I can sing too.”

In the early 1990s, John teamed up with Rusty Young of Poco, Bill Lloyd of Foster & Lloyd, and Pat Simmons of the Doobie Brothers in a country rock band called The Sky Kings. Despite the successful run of their CMT video “Picture Perfect,” the band’s recordings went unreleased due to a series of personnel changes first at RCA Records and then Warner Brothers, and the group was forced to call it quits in 1997. Shelved for years, The Sky Kings unreleased album, along with 14 additional tracks from the Warner Brothers archives, was finally published in 2000 by Rhino Handmade Records. Meanwhile, John’s alliance with Pat Simmons gained him a slot as bassist for the Doobie Brothers from 1992 through 1995 as well as a songwriting credit for “Can’t Stand to Lose” on the Doobie Brothers 2000 release Sibling Rivalry.

Not content to remain a sideman, however, John left the Doobie Brothers to follow his creative muse in pursuit of a solo career that, at the dawn of the 21st century, found him circling back to his acoustic “newgrass” roots.

“What we did back in the New Grass Revival days was unique,” he says. “Our vision was to take acoustic music somewhere new. What I’ve done with the John Cowan Band is try to recapture the magic of that ground-breaking experimentation and take it to the next level.”

The John Cowan Band, in various incarnations that inevitably feature some of acoustic music’s finest players, has been a force to be reckoned with these seventeen years – and counting. John is a fixture and a favorite at major festivals like the Telluride Bluegrass Festival in Colorado and Wilkesboro, North Carolina’s “traditional-plus” MerleFest, and he routinely sells out performing arts theaters and distinguished music clubs and listening rooms around the country. Stints in his band have helped launch the careers of Noam Pikelny (Punch Brothers), Luke Bulla (Lyle Lovett), and Scott Vestal, among others. The band’s current lineup most often features long-time collaborator and outstanding flatpick guitarist Jeff Autry, renowned and in-demand fiddler Shad Cobb, and mandolinist extraordinaire John Frazier.

John also is known for mixing it up; his creative collaborations range from his 2012 MerleFest performance alongside Darrell Scott and Pat Simmons to appearances with Nashville favorites The Long Players and Grooveyard. On his 2010 recording, The Massenburg Sessions, John joined forces with legendary producer George Massenburg (Little Feat, Randy Newman, Linda Ronstadt and others) to craft a collection that has the warm, intimate feel of a living room jam. It features duets with Maura O’Connell and Del McCoury. Longtime friend and co-writer Darrell Scott composed the haunting melody for John’s autobiographical ballad “Drown” (New Tattoo), a harrowing and graphic tale of childhood sexual abuse. The song led to John becoming the 2006 national spokesperson for Safe Place, an organization that provides and promotes safety and healing for individuals and families affected by sexual and domestic violence. “Drown” was also used in a video featuring John and others telling their stories to promote Nashville-based Our Kids, which provides medical evaluations and crisis counseling in response to concerns of child sexual abuse. It’s an issue close to his heart and one about which he remains vocal.

And as if John wasn’t busy enough, in March of 2012, WSM Radio – home of The Grand Ole Opry – launched John Cowan – I Believe To My Soul, an hour-long radio program that aired monthly for two years and featured John interviewing and playing the music of some of the giants and legends of contemporary music.

For example, his first guest was Leon Russell, whose catalog of songs includes timeless classics like “Masquerade” and “A Song For You,” and whom Elton John names among his biggest influences.

These days, John Cowan fans have to wait a little longer between shows and possibly travel a little farther to get to them. That’s because he’s working his own performances into and around another very busy schedule. In 2010, the Doobie Brothers found themselves once again in need of a bass player, and John Cowan was the first person they called. He took the job, and now he travels the world with the Doobies, laying down the low notes and singing the high ones as they perform hits such as “Black Water,” “China Grove,” “Taking it to the Streets,” and “Listen to the Music” as well as new songs that showcase the relevancy of this iconic classic rock band. John was also featured as a background vocalist on the Doobies latest album Southbound, released in 2014.

“I love my ‘job’,” Cowan says. “I love these guys. I love being in a band – a great band – and I love playing music for people every night. I’m also very grateful for every opportunity I have to play my music with my own band for the fans that have been so loyal to me over the years. I don’t ever want to stop sharing my music with them.”