COUNTRY, ROCK, BLUES, BLUEGRASS AND GOSPEL ARTISTS “ALL COME TOGETHER” FOR HURRICANE RELIEF 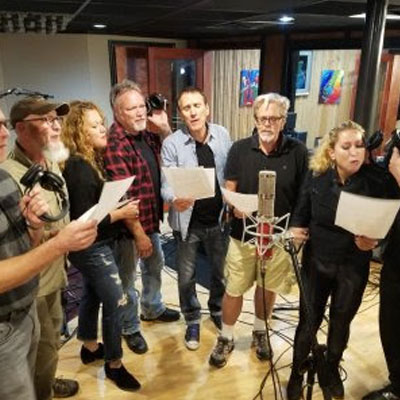 COUNTRY, ROCK, BLUES, BLUEGRASS AND GOSPEL ARTISTS
“ALL COME TOGETHER” FOR HURRICANE RELIEF
New Song and Music Video Features John Berry, John Oates (Hall & Oates), John Cowan (Doobie Brothers), Keb Mo, Heidi Newfield (Trick Pony), Chuck Jones, Dave Innis & Paul Gregg (Restless Heart), Casey James (American Idol), Collin Raye, Bryan White, Mike Farris and Darin & Brooke Aldridge
“John Berry & Friends: All Come Together For Hurricane Relief” Music Video Launches Today — Watch HERE
New Tune Encourages Americans to Donate to Storm Victims Via Fund Setup Through Samaritan’s Purse
Nashville, Tenn. (September 18, 2017) — Various artists from the worlds of country, rock, blues, bluegrass and gospel are all banding together to aid victims of Hurricanes Harveyand Irma. A few weeks ago, after the landfall of Hurricane Harvey in Houston, country singer John Berry was scheduled for a writing appointment in Nashville with award-winning songwriter Chuck Jones. The two went into the session with no intentions but walked away with the newly-penned song, “All Come Together.”
“Chuck and I got together to write and after seeing the destruction on television came up with the idea for ‘All Come Together,'” says Berry. “Everybody feels like they want to help in some way. We just want to bring attention to the cause, and all come together and help. There are a lot of people who are going to need help for a long time. This isn’t a two-week fix. We hope people will donate to Samaritan’s Purse to help the cause. Here’s your challenge to help.”
After writing the song, Berry went to work asking friends to join in and help sing on the tune. He quickly recruited a slew of artists who were more than happy to donate their time and talents. “All Come Together” features vocals from Berry and Jones, John Oates (Hall & Oates), John Cowan (Doobie Brothers), Keb Mo, Heidi Newfield (Trick Pony),Dave Innis and Paul Gregg (Restless Heart), Casey James (American Idol), Collin Raye, Bryan White, Robin Berry, Mike Farris, and Darin & Brooke Aldridge. The recording process was documented on film to create a music video to accompany the song. Watch the official music video HERE (https://youtu.be/FlT8o4BGthg).
Berry adds, “I know that people in Texas and Florida will need help rebuilding their lives long after the two week news cycle. My hope is that through this song and video people will continue to be encouraged to reach out to those that have been affected by Hurricane Harvey and Hurricane Irma. Samaritan’s Purse gives people the opportunity to help by either volunteering their time or through financial giving. In a time when our country seems so divided, we have a unique opportunity to all come together and do our part to help our fellow Americans rebuild their lives.”
The song will be available for download via iTunes and Amazon in the next two weeks with 100% of the proceeds going to storm victims. In the meantime, the public is encouraged to help the cause by donating their time or by giving money directly to Samaritan’s Purse at the following links:
Irma: http://sampur.se/Irma-Relief
Harvey: http://sampur.se/Harvey-Relief

“We’re so grateful for these artists who have come alongside our Samaritan’s Purse teams to help Texans and Floridians recover from Hurricane Harvey and Hurricane Irma,” notesFranklin Graham, president of Samaritan’s Purse. “God bless them for their generosity and hard work as they remind storm victims that there is still hope.”

For more information, contact Samaritan’s Purse direct at (828) 262-1980or www.samaritanspurse.org