MADE IN BROOKLYN WITH JOHN COWAN AS SPECIAL GUEST 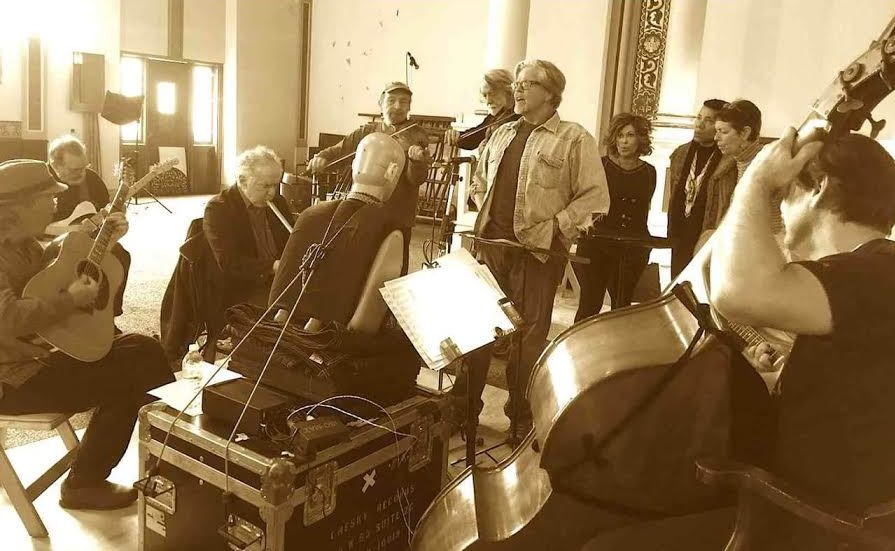 NASHVILLE, Tenn. (July XX, 2016) – Grammy-award winning producer, songwriter and musician John McEuen has announced his plans to release his sixth solo album titled MADE IN BROOKLYN (Chesky Records).* The 16-track collection of signature originals and songs from yesteryear was created in similar fashion to the landmark WILL THE CIRCLE BE UNBROKEN and will appeal to all genres and all generations. MADE IN BROOKLYN is scheduled for a September 30, 2016 release.

Much like the iconic Nitty Gritty Dirt Band’s WILL THE CIRCLE BE UNBROKEN album (initiated by McEuen in 1971), John convened an exceptional group of musicians (all of whom have been instrumental in molding American Music in their own right) in Brooklyn. Together they created a “music-to-your-ears” audio feast purposefully produced to enable the listener an “in-studio experience.”

“With the CIRCLE projects, my brother Bill’s production method put all the players in a circle, with all the mics mixed live to two tracks. The highest quality method at the time–it made listeners feel like they were sitting in the front row of a small concert,” McEuen introduced. “The Chesky technology utilizes just one special binaural mic and the performers circle around it; the listener feels like they’re in the band.”

MADE IN BROOKLYN, part of Chesky’s Binaural + Series, is poised to rank among the audiophiles’ top “must-have” recordings. Borrowing from an old-fashioned, live production method, all musicians were strategically positioned in a reverberant church (located in Brooklyn, NY) for a single-pass recording. The live performances were captured in high-resolution (24-bit/192kHz) with the single “Dummy Head” microphone system, affectionately named “LARS.” (Lars’ ear microphones are specially calibrated to recreate the spatial characteristics of human hearing to offer a spacious, lush and multi-dimensional listening experience).

“Put on a set of headphones and you’ll hear the three-dimensional sound Chesky recordings have become known for,” said Norman Chesky, President of Chesky Records. “MADE IN BROOKLYN is exquisite; you’ll hear some of the most natural and pure cool music ever recorded. We’re extremely proud of John’s project as an example of musical perfection with the binaural process.”

MADE IN BROOKLYN showcases signature originals (such as “Miner’s Night Out,” “Acoustic Traveller” and “Jule’s Theme,”) while paying homage to John’s roots with “Blue Ridge Cabin Home” (Flatt & Scruggs), “I Still Miss Someone,” (Johnny Cash), “She Darked The Sun” (Bernie Leadon/Gene Clark) and Warren Zevon’s “Excitable Boy.” The contemporary, fresh rendition of “Mr. Bojangles” (one of McEuen’s all-time favorite songs) spotlights David Bromberg’s vocal performance, Andy Goesling on clarinet and David Amram on flute. A special gem is “My Favorite Dream,” a never-heard nor recorded Felice and Boudleaux Bryant song brought to John by their son, Del Bryant. In McEuen’s opinion, “this is a tune that has been overlooked and will become a new classic standard.”

“Just as the CIRCLE album reached across lines of acoustic, Bluegrass and country, and appealed to folks from all walks of life, I believe MADE IN BROOKLYN will too,” added McEuen.

Making early introductions to the project, Chesky Records will release the debut single “Excitable Boy;” the track will be available via all major retail digital and streaming outlets on August 26, 2016.

• David Amram
(At 85, this American jazz/folk/classical treasure has recorded and performed with everyone who’sanyone. David plays pennywhistle, flute and percussion.)

• John Carter Cash
(Johnny and June’s son)…The two Johns pay homage to his father with “I Still Miss Someone.”

• Martha Redbone
(Martha and John wrote the music for “I Rose Up,” a classic 1807 poem of England’s WILLIAM BLAKE.)

MADE IN BROOKLYN • Available September 30, 2016 via all major digital retail outlets and HD Tracks. [Pre-sale begins August 26, 2016; purchasers who take advantage of the pre-order, will receive “Excitable Boy” as an instant gratification track.]

ABOUT JOHN McEUEN:
Over the course of his 50-year career, multi-instrumental “String Wizard,” John McEuen has performed more than 9,500 concerts, covering more than three million miles globally with the Nitty Gritty Dirt Band and as a solo performer. McEuen has recorded over 40 albums (6 solo)–four platinum and five gold–garnering awards that include GRAMMYs, Emmy nominations, CMA and ACM awards and IBMA Record of the Year honors. As a musician, McEuen has built a lasting legacy including his seminal work on the WILL THE CIRCLE BE UNBROKEN album, recognized as “the most important record to come out of Nashville” (Rolling Stone) and “the most important record in country music” (2004 ZAGAT survey).

Beyond performing, McEuen has produced more than 300 concerts throughout his career (the first in 1965 in Long Beach Calif. with Bob Dylan). In 2010, his record production of THE CROW (Steve Martin) won a GRAMMY for “Best Bluegrass Album.”

McEuen has a rich history in creating, producing and preserving original, traditional folk and acoustic music and taking it to new audiences. McEuen’s THE MUSIC OF THE WILD WEST was honored with the Western Heritage Award; he scored a GRAMMY nomination for STRING WIZARDS II and earned the Uncle Dave Macon Award for “excellence in preservation and performance of historic music.”
John is show host of the popular “Acoustic Traveller” radio show on Sirius/XM’s The Bridge (now in its 8th year) and is the CEO ofSyndicatednews.net, a music and political news website.

ABOUT CHESKY RECORDS:
Chesky Records opened its doors in 1986. The label is the brainchild of recording artist David Chesky who had the personal insight to recognize that standard audio albums lacked the subtle nuances of live performance, and that the human ear hears much more than modern stereo techniques reproduce. Enlisting the help of his brother, Norman Chesky, the business partners formed the NY-based label with one simple philosophy: to create the illusion of live musicians in a three-dimensional space–to capture and produce “music FOR your ears.”